Delighted to have two readings of poems related to family estrangement appear in this audio zine. Apologies for my current asthma-medication Lady-Batman voice!

Like many queer people, I am estranged from a large part of my family. We were a camping and travelling family, and I have quite a passionate relationship with the places we used to go. But the memory of family is intertwined with the memory of place, so that even when I am literally standing in the beloved place, I still feel that I am in exile. And that’s what these poems are about.

I have an angry poem about Melbourne public transport masturbators up today in Cordite Poetry Review‘s awesome Suburbia issue.

Readers of my twitter may recall this as the poem during whose composition my honour was deeply offended by MS Word suggesting I was trying to write ‘jazzed’ not ‘jizzed’.

If you were ever enticed by the idea of the mischievous long story of mine ‘Hector Fucking Katros’, Tincture Journal (which is sadly closing down) has now made all its archives free – you want issue 16 of summer 2016 for meeeeee: http://tincture-journal.com/buy-a-tincture/

Teasers and and quotes from this story are in my previous post, New fiction: ‘Hector Fucking Katros’ in Tincture Journal 16 (Summer 2016).

I have two poems in the wonderfully long-running Australian web journal foam:e this month:

This is nearly the end of my oeuvre of poems about my estranged mother. I’ve never spoken publicly about them aside from the bare announcement of publication. Realising I’d almost published them all now – and I don’t think I’ll write any more – I thought I’d write this post.

END_OF_DOCUMENT_TOKEN_TO_BE_REPLACED

Hey-hey, a story about some sad/mad lesbians on a roadtrip in country Victoria, by me – available for free online in Verity La:

This is the first of many sad/mad lesbian stories. I am really over coming out stories. I am all about the ‘all girlfriends break up with me and lesbian housemates TOO INTENSE ABOUT RECYCLING’ stories. 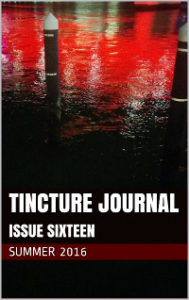 Have a poem in this @islandmagtas called ‘Pulled teeth, age 36’ about my weird fang holes from braces treatment. 🙂 Hadn’t seen Island’s latest redesign in person before – it’s so matte and sexy and magaziney!

A poem, ‘Men’, appears on The London Magazine website:

Down with men!! The title should be read slightly overloud with a scoff. 😀

Here’s ‘Letters home’, which appears in Orbis 173 in which I’m featured poet. 🙂 Link to buy: http://www.orbisjournal.com/